Dimos Dimitriadis was born in Thessaloniki . He started practicing the drums under the guidance of Christos Yermenoglou and later on Modern Music School of Thessaloniki in which his second year he got a free scholarship. His musical studies also include a degree in classical music theory. He has attended various drum clinics from different artists such as Thomas Lang, George Kollias, Joel Taylor, Kostas Anastasiadis.

He has played many styles of music all around Greece but also in Europe. His bands have shared the stage with great artists such as Waren Haynes, Blues Pils, Otiz Taylor, Gus G, Marky Ramone, The Subways, Vodka Juniors, Bad Movies, Blues Wire and many more.

Dimos at the moment cooperates with "The Coreys", "Xristos Tsif and the Lost Boys", "Rusty Cadillac", "Dimorfia", "George Ioannidis".

He also works as a drum educator delivering private lessons as well as cooperating with the conservatories "Melodia" and "Orfeas" in Thessaloniki.

He is proudly endorsed by R-Stick. 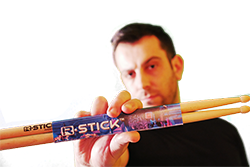 The Coreys is an alternative punk rock band from Thessaloniki, GR.
The band was formed by four friends, Bob, Kurk, Mario and Dimo. They play music they love and keep writing original songs. They are also the producers of the Surreality Show series of episodes, that captures the moments of their adventures with the band and also making fun of real life situations of them and their friends